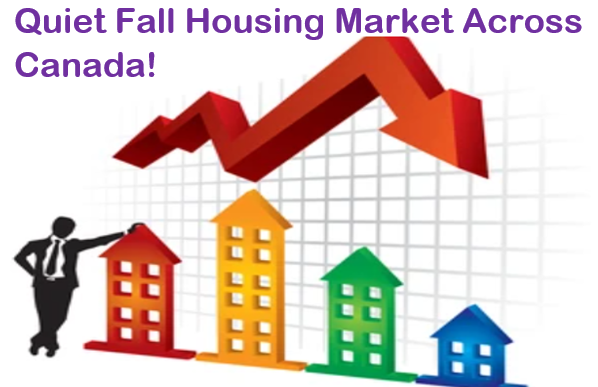 Across Canada, home prices are softening and house buying and selling activity may be stabilizing at a lower level, the Canadian Real Estate Association said in a release announcing its latest housing numbers.

House prices fell 1.2 per cent in August from July, largely because of declining sales volumes in Toronto and Vancouver, CREA said. It’s not entirely clear what the market will look like going forward. The association says it expects prices to continue to fall before reaching more stable levels in the second half of this year. But there are reports that the recent sharp decline in Toronto, Canada’s largest housing market, may be levelling off.

That is, unless there is a significant shift in mortgage regulations or interest rates. But if there are such changes like an increase to the Bank of Canada’s benchmark rate from its current target range of 0.5 per cent–1 per cent, they could make already-tight affordability conditions even worse for prospective homebuyers across much of Canada’s biggest cities.

Sales activity over Canadian MLS Systems edged down 0.2 percent from September to October, compared to a decline of 1.9 percent between August and September, CREA said.

Sales activity in Canada was lower for the fourth month in a row in October, according to the Canadian Real Estate Association (CREA).

The number of homes sold last month fell 2 per cent from September on an annual basis was another month of lower sales activity and according to the most recent numbers from the Toronto Region Real Estate Board (TRREB), the average resale price of all property types in the city was $1,089,428 in October, up from $1,086,762 in September.

Mortgage stress test rules in Canada became more stringent on June 1st 2022, reducing the purchasing power of most borrowers. The banking regulator of the country announced the change in May 2022 in response to an overheated market that is now beginning to cool.

Property values have fallen in each of the past seven months across the nation, in the majority of Ontario including Toronto, and in key British Columbia markets including Vancouver. The composite MLS home price index in Canada dropped 1.4% month-over-month in September and is now 8.8% lower than its peak in February.

Inventory at September’s end was 3.7 months, up from 3.5 months in August. While inventory is still below the long-term average of five months, it has increased from the record low of 1.7 months set in 2022.

Home prices in Toronto were still 5.7% lower than they were a year ago, but October was the third straight month that the TRREB benchmark index saw little to no change.

In October, the Greater Toronto Area housing market continued to adjust to higher borrowing rates, with sales falling 49.1% compared to the same month last year and benchmark prices falling 0.1% from September to October.2022.

The benchmark price is a better indicator of the direction of prices because it’s not affected by changes in the mix of homes sold. The average price, on the other hand, can be skewed by expensive homes that are selling instead of less-expensive ones.

The data shows that most markets are generally cooling off after a hot start to 2019 except for Vancouver, where we saw a big jump in prices over last month and year-over-year. The housing market is still soft, but there are some signs it is starting to pick up.

Taking everything into consideration, it’s clear that the housing market in Canada is not as strong as it once was. The real estate market has been slowing down for some time now and there are no signs of recovery any time soon.

Factors such as rising interest rates and stricter mortgage regulations have put pressure on homebuyers who are struggling to get approved for mortgages with traditional banks. This means that more people have turned towards alternative lenders such as Home Trust Financial, which offers flexible lending options that can help Canadians buy homes today.

I hope this blog post has helped you better understand what’s happening with Canada’s housing market so you know how best to navigate through these tough times ahead.

Should I sell my house now or wait until 2023 Canada?

Anxiety spikes over housing amid Canada’s plan to welcome 1.5M new citizens by 2027

Can you afford a variable-rate mortgage? How to craft your own financial fitness test