Low interest rates and an influx of foreign buyers in cities like Vancouver and Toronto have contributed to a strong demand for housing in Canada. This demand has, in turn, driven up housing prices in these cities. 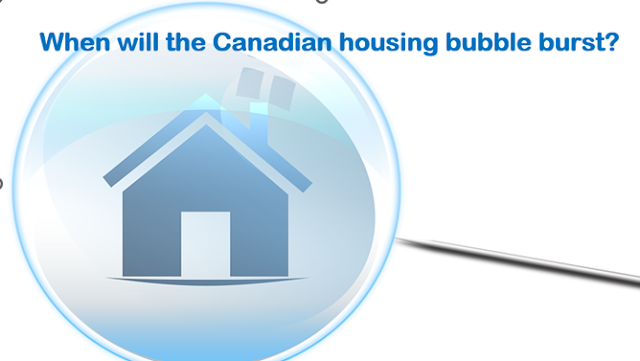 When will the Canadian housing bubble burst?

Of course, it’s impossible to say for sure whether or not a housing bubble will burst in Canada. However, if interest rates do go up as expected, it could put more pressure on an already hot market. We’ll just have to wait and see what happens next.

On October 26, the Bank of Canada will make its next decision about interest rates. Many people think that the central bank could raise rates by 50 basis points. If this happens, it will be interesting to see how the Canadian housing market reacts. After all, there has been much speculation in recent years about whether or not Canada is facing a housing bubble.

In recent months, Canada has seen an increasing number of high-profile news stories about people being unable to pay their mortgages, which has fueled speculation that the housing market bubble will burst and lead to a financial crisis in Canada similar to what happened in the United States during the subprime mortgage crisis.

The Toronto real estate market is the most overvalued market in the world. It’s relevant now because the housing bubble is bursting. This is having devastating effects on the Canadian economy as a whole. The downside risk is colossal.

A recent study found that Canadian house prices are overvalued by about 30%. This means that a correction could see prices fall by up to a third. This would be devastating for many homeowners who have taken on large mortgages. It would also have a knock-on effect on the wider economy, as consumer spending would be hit and construction activity would dry up.

The housing bubble has been fueled by low interest rates and lax lending standards. But with interest rates set to rise and stricter lending criteria being introduced, the bubble is starting to burst. This could lead to a very sharp correction in the Toronto housing market, which would have far-reaching consequences. This is a recipe for disaster, and it’s only a matter of time before the bubble bursts.

In response to concerns about the potentially imminent risk of default in the Canadian real estate market, the Bank of Canada made clear that it will not pivot away from its rapid pace of interest rate increases. GDP will take a hit before mortgage defaults become a collateral issue for the Canadian banking system.

The Bank of Canada has been warning Canadians about high levels of household debt for years, and now it seems like its warnings are coming to fruition. Mortgage delinquency rates have fallen from their peak in 2016 but still remain elevated at 3.2%. The increase in interest rates is likely to push them even higher as Canadians struggle to keep up with payments on their debts, which are overvalued relative to their income.

Household debt at an all-time high

The Bank of Canada has stated unequivocally that it will continue to raise interest rates at a rapid pace. GDP will take a hit before mortgage defaults become a collateral issue for the Canadian banking system, but it is unlikely to happen any time soon, as we have seen historically in other countries.

The Canadian real estate market, which is largely based on mortgages, is starting to feel some pain from rising mortgage rates and it won’t get better anytime soon. As for the monetary policy rate, mortgage rates are likely to go up even more. We anticipate that the conventional 5-year (fixed) mortgage rate will rise and peak at 6% in the fourth quarter of 2022. Since rising interest rates make people less likely to buy a home, the national house price is expected to drop by about 15% from its historical peak in Q1 2022 to Q2 2023.

Canadian families have taken on so much debt that even a small rise in interest rates could hurt them. As long as wages remain stagnant and unemployment continues to rise, Canadian real estate is dangerously overvalued and is likely to come crashing down soon enough.

Will the Canadian housing market crash in 2022?

Due to rising interest rates, the housing market bubble that occurred in Canada during the pandemic has burst, and sales and prices are likely to continue declining through 2023.

However, everyone in the global economy, from the average worker to affluent professionals, has been negatively impacted by the excessive price inflation caused by a lack of housing supply and the expanding influence of market forces. Beginning 2022 has been a prosperous year for the real estate market.

Is it wise to buy a house now in Canada?

There are advantages and disadvantages to waiting to purchase a property in Canada at this time. With mortgage rates expected to rise even further in the near future, now may be the best time to purchase a home. The Bank of Canada will make four more announcements addressing its key policy rate in 2022.

About 87% of purchasers utilise a mortgage as opposed to paying cash. Typically, acquiring a mortgage loan from a financial institution is required to purchase a home. Your mortgage interest rate is significantly connected with the federal government’s prime rate.

Should I buy a house now or wait until 2023 in Ontario?

It looks that the housing market is beginning to cool down. However, many individuals do not anticipate a significant improvement within the next few months. According to Alex Capozzolo, co-founder of Brotherly Love Real Estate, “Knowing this, it is probably best to wait until 2023 to see what the market brings.”

Mortgage rate increases have been larger and more frequent than anticipated, which has contributed to “rapidly deteriorating” market conditions and the altered forecast.

Despite the massive adjustment, Desjardins forecasts that Ontario house values will be around 15% higher by the end of 2023 than they were before the pandemic began.